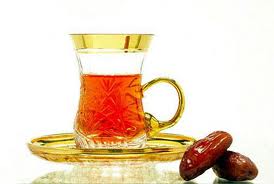 One thing I have learnt from fasting in Ramadan since I converted to Islam in 1994 is that you appreciate food and water more fully.

When you can eat whenever you want, you take food for granted.  Even being hungry is not the same, because when you are not fasting, and you feel hungry, you eat.

During fasting, when you feel hungry, you wait.  Until sunset.  And if the hunger pangs began around 10 am, and you won’t eat until 8 pm, 10 hours later, that’s a lot of waiting.

This waiting to eat and drink is not like dieting either.  When you diet, you don’t eat this or that food.  You may have cravings, you make feel sad, you may even resent watching those around you eat what you’ve decided not to eat – but still, you eat, a carrot, a lettuce leaf, some celery.  It’s not the same thing as waiting all day to eat salad.

Fasting during Ramadan is not even like being anorexic – the one who doesn’t eat to the point of sickness.  During the day, the anorexic experiences hunger pangs, and doesn’t eat, and feels a sense of power at controlling this need to eat.  But even an anorexic will eat something during the day, or during a moment of weakness, an apple, a piece of bread, a chocolate.  Anorexia is not like fasting, to say the least, and not to mention the spiritual and motivational differences between fasting and anorexia.

For Ramadan is not like being on a diet (Though plenty of Muslims hope to lose weight during Ramadan, it is not a given that one will.)  When it comes time to break the fast, you eat, and eat well. Ramadan is full of all kinds of treats and special dishes that are cooked only at this time of year.  Some people go overboard and feast much of the night, while sleeping much of the day.

Sometimes I break my fast with a glass of water.  Water tastes amazing when you’ve not had it all day.  And drinking a glass of water never has the same feeling outside of fasting.  Yet, drinking water seems so mundane, so ordinary.

Many kids (and adults) turn up their noses when you offer them a glass of water to quench their thirst – and prefer pop or juice.  But try water after fasting – so smooth, so soft, so cool as it trickles down the throat, refreshing that parched spot on the back of the tongue.

And when the fasting day is all over, there is a sense of liberation.  Now I can eat or drink as I wish.  A saying of the Prophet Muhammad (peace be upon him) springs to mind:  “The fasting person has two occasions for joy, one when he [or she] breaks his fast because of his breaking it and the other when he meets his Lord because of the reward for his fast.”

And then there’s sometimes a guilty thought for those who live as if they are fasting, but can’t break their fast at the end of the day because of their life circumstances: poverty; war; drought.  It is for this reason that we are taught that Ramadan teaches compassion, and encouraged to be extra generous during this month.

Before I became Muslim I knew nothing of Islam (except the negative stereotypes – oppression, violence and so on).  When I met Muslims for the first time and observed their Ramadan fast, I thought it was crazy, a bizarre religious requirement, and one more reason to be an atheist.

Only a mean “God” would ask people to abstain from food and drink.  I used to see the Muslims lolling about in the afternoons at the international student centre at Queens University, where I had come from Australia to study my MA.  They were too tired to study, or so they said.  What a silly event, I thought, what a waste of time.

I grin to myself sometimes with this memory, as it is now sometimes I who flop down on the couch in a Ramadan afternoon, feeling lethargic.  And I had smiled with recognition, (as well as incredulity and shock) when I later learnt that Tunisian President Bourguiba (ruled 1955-1987) had tried to ban Ramadan in his efforts to increase worker “productivity” and “modernisation.”

Part of me understood where he was coming from, while the believer in me trembled at his audacity in going against the Islamic teachings so dreadfully.

Actually, Ramadan indicates that there is more to life that the material world.  Tiredness in the afternoon, or even a short bout of unproductivity, is not the measure of success – it is the spiritual reward that counts most.

Overall I have found that Ramadan is a very productive month.  There is no time wasted on snacks or lunch; all that time spent preparing and eating food, and drinking, is used for work.  It seems easier to focus without the distractions of food.

My first few Ramadans were excruciating.  And I was blessed to have become Muslim during winter, when we broke our fast around 5.00 pm.  I always used to joke that in 15 years when Ramadan was during a Canadian summer, that I’d move to the Equator.

I have realised as time has passed the meaning of the Qur’anic verse that tells us to vie with each other in piety: I’ve met people who find fasting easy, who love it, and look forward to it, but they find something else very difficult; whereas I might find that thing easy, but fasting very difficult.  Which is why the Prophet Muhammad (peace be upon him) once remarked that people are equal in the eyes of God like the teeth of a comb.

Deeply spiritual Muslims will know that what I am writing about Ramadan signals a lack in my spirituality.

This hit home to me a few weeks ago, as I felt a kind of dread in the lead up to Ramadan – will I be able to handle such a long fasting day – I wasn’t sure I would be able to do it.

I marvelled at the story of one of the Companions of the Prophet (pbuh), Abu ad-Darda’, who said he would not like to live except for three things, “Having thirst for the sake of God during the midday heat, prostration for God’s sake during the middle of the night, and sitting with a people who choose the most pleasant speech in the same way that one chooses the sweetest fruit.”

I mulled over this, and those friends who have expressed a similar and somewhat baffling love of Ramadan: Abu ad-Darda’ looked forward to what I was dreading: thirst in the heat of summer.  Clearly I have been lacking something (Muslims will know this as ‘eeman’ – a gauge of my faith or relationship to God).

Ramadan is nearly over, and I’ve made it, thanks be to God’s help.

I have realised this year, in a kind of epiphany, that it is the spiritual relationship that sustains you through the long days of hunger and thirst.  If you want to get more out of fasting than hunger or thirst, to nourish the spiritual side is to nourish the body too.

Of course, we are taught this every year, as Ramadan approaches and is upon us.  Why are we fasting?  “O ye who believe! Fasting is prescribed to you as it was prescribed to those before you, that ye may (learn) taqwa [self-restraint, God-consciousness, piety] (Surah Al Baqarah 2:183).”

But I suppose I didn’t understand the full extent of it.  I probably still don’t.

Deeply spiritual Muslims may well shake their heads in wonder that I could have been so blocked-headed all this time – I am wondering myself – but it is normal, each one of us is on our own unique spiritual journey to God.

The real blessing is to understand the true message of Ramadan, even if it has taken me so long to get there.

That is why I think those 15 years after I first fasted, I have finally fasted my first Ramadan.

It is also why I believe the Qur’an and its traditional teachings should be approached with humility and patience.  You never know how long it may take to do the work needed to pry open the shell and find the pearl.

Reg: My First Ramadan and Eid by Dr. Kay Frederick

Dr. Kay Frederick’s article on “My First Ramadan and Eid,” is one of the most captivating, insightful, and above all, inspiring spiritual pieces I have had the chance to read for a long time. Thank you for sharing the Doctor’s witty and candid reflections on the true meaning of fasting during the holy month of Ramadan.