The Centre for Islamic Studies (CIS) condemns religious extremism in all its forms and calls on the Government of Pakistan to take all steps necessary to eradicate religious extremism once and for all time. This follows the shocking, cold-blooded murder of Sri Lankan Priyantha Diyawadana by a rabid mob, accusing him of blasphemy.

We condemn this horrific killing in the strongest possible terms and while appreciating the swift action by the Prime Minister Imran Khan in ordering the arrest of the perpetrators of this unspeakable crime, also urge him and his administration to break the backbone of religious extremism by repealing Blasphemy Law and coming down hard on extremist elements, which among other things can include banning extremist parties and organisations, depriving religious extremists and supporters of their civil rights and incarcerating hate preachers.

As we have seen time and again, religious extremism is the cause of some of the worst atrocities against humanity and leads to a failed state and mob rule. It has to be eliminated in the harshest possible manner. As such we call on the government of Imran Khan to safeguard the good name of his nation and our noble faith by eliminating religious extremism in all its devious and diabolical forms.

We also call upon  him to bring the perpetrators of this heinous crime to justice and to compensate the family for their loss. We are one with the bereaved family and can fully understand their loss, not only of their sole breadwinner, but also of a loving husband and father. 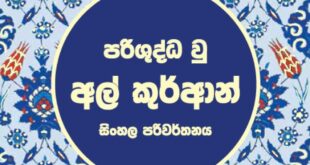