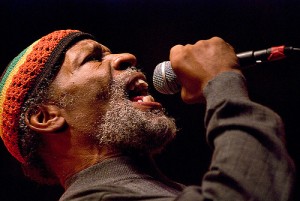 Hip-Hop – specifically the Rap art form of Hip-Hop – is usually preceded by its reputation of ”Gangsta life-style” lyrics riddled with curse words, bad grammar, and the infamous “N” word, stereotypically painting a post-apocalyptic portrait of poor African-American communities. It is widely promoted as an American subculture/multi-faceted art form rooted within the 1970′s poverty stricken South Bronx communities of New York City. For many, it may even be seen as the most abased form of artistic American culture to date. Despite its “hard” reputation, the once musical fad called Hip-Hop has reached every facet of the world from the Techno clubs of Japan to the war torn “ghettos” of the Gaza Strip. Within the Muslim community, it may be seen as something foreign since music itself is a controversial topic within the Muslim community.  The interesting fact about Hip-Hop is that its inception into American culture was actually pioneered by Muslims.

The precursors of Rap were a group of African-American and Latino poets from New York City called the “Last Poets”.  According to the website of Jalal Mansur Nuriddin, the group was formed on May 19, 1968 in Harlem, New York City out of a black writer’s workshop. The original line up of the Last Poets was Gylain Kain, Abiodun Oyewole, David Nelson, Felipe Luciano, Omar Bin Hassen, Jalal Nuriddin, and Suleiman El-Hadi. They were mostly a confederacy of poets separated by style of writing and internal conflicts. Despite this, they were united by the struggle for civil rights and the common outlook of their prospects as poor minorities within a racist and harsh American society. The Last Poets were undoubtedly a revolutionary group spewing revolutionary poetry, and their body of work could definitely be seen as extreme for the time. The Muslims of the group, Jalal Nuriddin and Suleiman El-Hadi, were known to give powerful messages of the harsh realities of being Black in America while fusing their understanding of the religion of Islam into their poetry. For these poets, their poetry was seen as a way to satirize the American society in which they found their community and religion opposed. The poetry also served as a powerful tool of da’wah. In “The Mean Machine”, one of the most famously known songs from the Last Poets, Jalal Nuriddin displays the influence of the hadith (tradition) of the Dajjal and the state of the world at the end of time in his poetry.

The Muslims of the Last Poets were not known to be, nor did they profess to be, scholars of Islam. It is clear, however, that their understanding of their religion influenced their body of work. One of the most famous albums of the duo of Jalal Nuriddin and Suleiman El-Hadi was called the Delights of the Garden. A poem in this album was divided into three songs called “be”, “yond” and “er” in which the poets give a fantasy-filled depiction of the end of the world. It involves two companies of men and jinn debating on how to deal with the last day, ending in a literal race against time and jinn as the party of men seek to surrender to the Will of God and no longer attempt escape from the inevitable.

Many of the other poems written by these poets and the larger group of Last Poets were mainly politically charged. Suleiman El Hadi was known for his poem called “Ho Chi Minh” in which he poetically tackles the events of the Vietnam War. This particular poem satirizes the American government’s foreign policy as the distastefully aggressive and vain “Uncle Sam” character who parades his might and technology over an old rice paddy farmer representing North Vietnam. As Uncle Sam sets to bully the old man, he is ambushed by booby traps, sending him in retreat for fear of his life. Another famous historical poem written and performed by Suleiman was the “Unholy Alliance”. This is a rap over twelve minutes long depicting over 400 years of western colonialism/imperialism. The purpose of this spoken-word poetry was to make the community aware of the times that they were living in as they saw it.

The content of the overall body of work of the Last Poets from their formation in 1968 until today is the basic structure and mission statement for what mainstream Hip-Hop is producing now. The poets would probably say that modern “rappers” have fallen below the standard that the Last Poets set within their poetry. Modern rappers may beg to differ. The outlying structure, as previously stated, is the same.  Rappers attest to make a larger audience aware of what is going on in their world as they see it. This has always been at the core of Hip-Hop. If, in fact, hip hop has remained true to its roots and purpose set by the Last Poets, then the art being produced depicts reality. While I make no assumptions that the majority of rappers intentionally produce indecent, misogynistic, and ignorant music to alert their audiences to those characteristics within society, does this music in fact depict a true account of the present? If the answer is yes, then whether intentional or not, the music gives the listener the opportunity to question the moral and civil injunctions set by the current society.  At the least, the intention of Last Poets, specifically Jalal Nuriddin and Suleiman El Hadi, was to send the message of Islam to their audience as well as wake them up to the realities of their time. One can only hope that rap and Hip-Hop as a whole returns back to its roots.