A graduate of Cornell University, Brown University Medical School and George Washington University Hospital residency program, Laurence B. Brown is an ophthalmic surgeon, a retired Air Force officer, the medical director and chief ophthalmologist of a major eye center in the Middle East. The author of four books of comparative religion, he is also an ordained interfaith minister with a passion for writing reality-based fiction. The Eighth Scroll is one of three completed novels, and the first published. For the past two decades, he has divided his time between America, England, Jordan, and Saudi Arabia. Dr. Brown’s immediate family consists of his wife, three daughters and an ever changing assortment of hamsters and parrots.

Q Please tell us a little bit about your experiences as a youth growing up in America and how these experiences shaped your original concept of God and religion.

A I was raised without a religion. My parents were non-practicing Christians, but in fact it seemed to me that my father was pretty much atheist. I remained atheist into my 30s, and I did not recognize God until after my second daughter was born. Many people think that I was Christian before I converted to Islam, but this is not true. What is true is that I tried very hard to become Christian once I started to believe in God. However, there was too much hypocrisy in Christianity for me to ever accept the religion as a whole. When I learned about Islam, this was the first and only religion that answered all my questions and made sense of the continuity in the chain of revelation.

Q Would you characterize your background and youth as that of a “typical American”?  Why or why not?

A Sure. Uhh, well, excepting for the fact that I grew up in San Francisco in the 60s and 70s, right in the middle of the hippies and the rock ‘n roll revolution. However, I was fortunate to be raised in a conservative family with healthy moral values. I think this helped me to stay relatively clean during the period of my youth and young adulthood. Oh, sure, I was not an angel. However, I was considerably more straight than many of the people around me. I was a bit of an introvert during my teenage years, and with the exception of a couple of close friends, I stuck pretty much to myself. For example, I never really enjoyed team sports. I always derived more satisfaction from going off by myself skiing or windsurfing than I did in team competitions. Another thing I remember from my childhood is having been a very sensitive kid — something that has carried over into my adulthood. Even now, in my 50s, I tend to feel other people’s pain more than most people seem to. This is something I have struggled with all of my life, because most people do not share the same level of sensitivity or understand why I am so sensitive. On the other hand, I believe this sensitivity has helped me to be a better person and a better doctor, because both my religion and my profession are centered on caring for others.

Q In an episode from The Deen Show, maashaAllah, you shared a remarkable story about how the birth of your daughter was instrumental in guiding you to believing in Allah.  Briefly, please share with us this story.

A When my second daughter was born, I was still an atheist. Hannah was born with a problem near her heart, and she was not expected to survive. This was the first time in my life that I ever really prayed. Being an atheist, I did not know if God really was there, but if He was, I told Him that if He saved my daughter, and then guided me to the religion that was most pleasing to Him, then I would follow. Within 20 minutes, the doctors told me my daughter would be fine, and she went on to become a perfectly normal child, without needing surgery or medicine. I realized that God had made good on His part of the bargain, now I had to make good on mine. After five years of searching Judaism and Christianity, I learned about Islam, and this answered all of my questions about God and religion. It was then that I became Muslim.

Q What event(s) finally convinced you that Islam was the true religion?

A I had studied Judaism and Christianity to the point that I shared certain core beliefs, such as belief in God and His messengers, but at the same time I saw the deficiencies of these religions. Only when I learned about Islam did I find a religion that was wholly consistent, that resolved my doubts, and that answered all of my questions.

Q In another episode of The Deen Show entitled “Dr. Brown’s Jihad”, you discussed how difficult life was for you after you became Muslim.  You also reflected on how some Muslims leave Islam after facing relatively small tests of faith.  For you, what were the most difficult trials you faced after accepting Islam, and how have these tests influenced your outlook on life and being Muslim?  Do you feel stronger as a Muslim as a result?  Why or why not?

A Rather than talk about specifics, I would prefer to say that all Muslims face trials in their lives and in their religion. Those who successfully pass their trials and hold onto their religions always feel stronger as a result. In the Holy Qur’an, Allah tells us that we will be tested. He doesn’t tell us who will pass and who will fail. I thank Allah that He has given me the strength to hold onto my religion. From the very beginning, I could have gone back on my part of the deal I made with Allah, as so many people have. Allah tells us the story of the people who claim true faith when a storm tosses their boats on the seas, and they expect to die, but then who return to disbelief when they are saved and on solid ground. I could just as easily have assumed that my daughter’s recovery was not a miracle from Allah, but that she would have gotten better on her own anyway. It was not my intelligence or any inherently good quality of my own that drove me to fulfill my promise to Allah. Rather, Allah guides who He wills, and leaves to stray who He wills. Alhumdulillah that he chose to guide me to Islam in this way.

Q What advice would you give to Muslims who are doubting their faith or struggling to hold on to Islam?

A To me, strengthening faith is like building a house. To begin with, the house is only as strong as its foundation. A person has to start with sincerity and good deeds. First, you make space for the foundation by turning to Allah and making sincere tawbah (repentance) for previous sins. Next, you lay the foundation by declaring your intention to be a better Muslim. Following this, you build the house that is going to become your religion first by performing the requirements (fard) of the religion, and then by strengthening it with supplementary (nafl) good deeds. If you start out by looking at the size of the task ahead of you, you may feel it is hopeless and give up before you even start. However, like building a house, you simply have to take it one step at a time. With the help of Allah, true sincerity in your heart, and dedication to the religion, brick by brick and good deed by good deed you will strengthen your faith.

Q Many Muslims in the West dream of moving to a Muslim land and imagine an Islamic utopia after their emigration. What was most influential in your decision to reside in Saudi Arabia, and overall how do you find life in a “foreign land” after spending most of your life in America?  Also, though no place on earth is without struggle, do you feel that there is an element of utopia present in your experience here?  Please explain.

A The fact of the matter is that there is no paradise on planet Earth, or anywhere in this worldly existence. As a Muslim, I have lived in America, England, Jordan, and Saudi Arabia. For me, I am happiest here in the holy city of Medina, despite the trials of living in a foreign country. I cannot really describe exactly why I feel so committed to Medina, except to say that I feel a bond both with the people of Medina and with the city itself. Before coming to Saudi Arabia, I had a dream in which I saw the prophet Mohammed, peace be upon him, directing me to come to this place. I have been here now for 12 years, and I hope Allah will keep me here for the rest of my life. 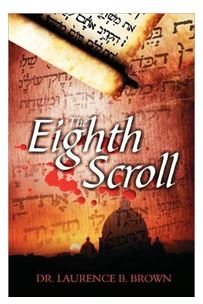 Q Please share with us the inspiration behind your novel The Eighth Scroll and how your personal experiences and research influenced the storyline.

A The inspiration behind my novel The Eighth Scroll is the drama of the Dead Sea Scrolls. Many people do not understand what is the excitement behind the Dead Sea Scrolls, but once they do, they realize that countries and religious interest groups might kill to possess the scrolls, and most certainly would fight to suppress them. The Eighth Scroll tells the story of what would happen if the world discovered a Dead Sea scroll that clarified the world’s religious differences. This is just one small, but highly significant, steppingstone through which we can understand the Jewish/Christian/Islamic debate.

Q Do you find that the genre of Islamic fiction is a relatively “untapped resource” for da’wah?  Why or why not?

A Certainly. Most of the West is entertainment oriented. If we are to try to appeal to the Western mind, we must not only approach the audience with evidence and intelligent discourse, but we have to reach the masses on their level. Most people would rather read an exciting action-adventure novel than read a dry book of scholarly analysis. Action-packed adventures like The Da Vinci Code reach millions, and deliver the subject in a form that people enjoy reading. The problem for us as Muslims is to write fiction in a way that does not work against our religion. Writing an action adventure novel without transgressing into adult language or situations, and without developing inappropriate subplots is a trick. Having said that, it can be done, and I look forward to seeing more efforts in this genre in the future.

Q Have you written books other than The Eight Scroll?  If so, please tell us about them.  Also, where and how can readers in Saudi Arabia purchase your book(s)?

A My books can be found through my website, LevelTruth.com, and through Amazon.com. The e-books are only $.99, and can be purchased through iTunes as well as through Amazon. I have two more novels that are in the works at the moment, and the first of these should be released within four months. This novel is entitled The Returned, and is the dramatic story of a social anthropologist’s adventures in the Amazon rain forest. I don’t want to give away the plot, but what I can say is that this book delivers the same energy and impact as readers encountered in my first novel.