Converts to Islam say their choice wasn’t made lightly By ZAHRA AHMED, FOR THE CHRONICLE 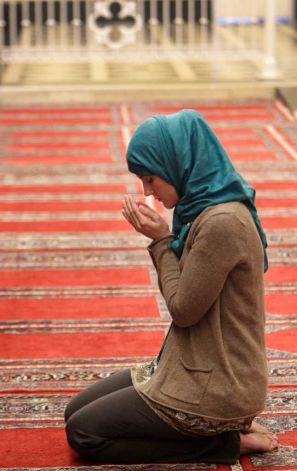 Sarah Prucha and Christy Thephachanh were both spiritual seekers when the people around them who most lived their faith were Muslims.

Prucha was 25 and working at a downtown Houston bankwhen she noticed co-workers pausing five times each day to pray. Even things as small as saying Bismillah (In the name of God) before eating or saying Alhamdulillah, (All praise is due to God) after sneezing caught her attention.

Thephachanh first became friends with Muslims while in college. A few years later when she wanted to make faith a bigger part of her life, she decided to learn more.

Her parents, Laotian immigrants, had been Buddhists, but slowly fell away from their faith after moving to Corpus Christi where there's no real Buddhist community.

In the past year, both women – like 20,000 other Americans each year – took the Shahada, a creed declaring their conversion to Islam.

Since neither woman wears a hijab, or headscarf, outside of a mosque, there are no outward signs that they're Muslim. But like many Muslims they worry about how their faith community is perceived.

A recent survey by the Pew Research Center shows that 28 percent of Muslim Americans report "being looked at with suspicion," and 22 percent said they'd been called offensive names. Their feelings of being subjected to intense scrutiny at airports, by police and in everyday life haven't changed since a similar survey in 2007.

Many of those who come to classes led by ISGH lecturer Mazhar Kazi are educated, from the upper middleclass and have studied many religions, he said.

"They're looking for something to make them happy," he said. "Many people who come in have emptiness in their life. They want to fill up that blank and find peace in their own personality."

Jamie "Mujahid" Fletcher, who runs a non-profit called IslamInSpanish in Houston, said two to three people convert every month at Houston's main mosques. "Sometimes, they have looked into a religion and they're not satisfied," he said. "They aren't finding straightforward, logical answers to their questions."

Fletcher, a former Catholic who converted to Islam three months before September 11, said many Americans are drawn to Islam because of what they hear in the news. Some, curious about the religion, learn that the Muslims living in Houston are not like those being portrayed in the media.

Prucha said her search for faith and subsequent conversion to Islam came at a time when she was a young mother of two, going through a divorce. Raised Catholic, she first went back to church but realized she'd lost her connection to Catholicism and couldn't agree with some of its rituals and essential tenets.

"I needed religion back in my life to give me and my boys a moral and social foundation," said Prucha. "At that point, I jumped into learning as much as I could about Islam."

She first went to the downtown Islamic Da'wah Center for information and later took spiritual education classes at the ISGH's East Side Main Center.

Prucha had conversations with IDC manager Ameer Abuhalimeh about many topics, but one of her first concerns was about how the faith treats women.

"I'm a strong, independent woman," Prucha said. "So I thought to myself, if I have to be a submissive housewife, let me stop (learning about Islam) right now."

She said Abuhalimeh, told her that Muslims are urged to obey and respect their parents, especially their mother, saying that heaven lies beneath the feet of a mother.

Thephachanh said that as the child of immigrants, she's always had natural curiosity about other people, cultures and world religions. Although she didn't know much about Buddhism growing up, she still felt a pull toward religion. She said she believed in God, like her mother, but had plenty of questions too.

"I had always been drawn to (Islam)," she said. "I like to learn about cultures and religions, so I always try to keep an open mind."

Prucha's first test came in 2009 during the month of Ramadan, even though she hadn't actually converted yet.

"I hadn't taken Shahada yet, so (fasting) was more of a personal thing," said Prucha. "By the end of the month, I realized Ramadan was much more than fasting, and I was thanking God. That's when I jumped into the whole process of reading."

Thephachanh said that as a nurse with a biology degree, rationality and logic are important to her. She wants people to know that she's not following the faith blindly.

"After reading about (Islam), it just made sense to me. It's about believing in one God and not associating any partners with him," she said. "I'm a very logical person and Islam is a very logical religion."

Both women say their new faith has brought peace and happiness into their lives, but they add that talking to their families about it is difficult.

In fact, Thephachanh hasn't yet told her parents or siblings about her conversion.

Prucha says that her family has been accepting of her choice, but it's a topic they don't discuss much.

"I wanted them to know that my intentions were pure. I didn't want them to think it was because I met a guy or something," she said of her conversion. "I don't think they really knew what to say. They were really strong in their own faith."

"In the Quran, it says that God will open his heart if your heart is open to it. I leave it up to them to ask questions," she said. "(Me converting) is kind of a touchy subject so we'd rather just not talk about it. Ultimately, I think our relationship with our family has gotten stronger. It's a blessing that they've been accepting.

Thephachanh said she believes that ultimately her family will be accepting of her decision, too.

"My life hasn't dramatically changed," she said. "I'm still the same person, still incredibly goofy. I have all the same friends. I'm just more spiritual. I pray and talk to God more. I have a new outlook on life, and I did this for myself because I think it's the right thing."