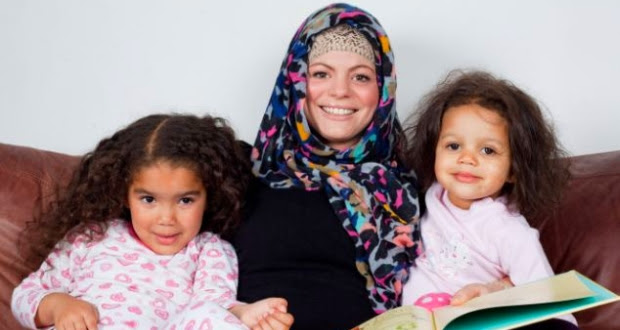 Just three months ago, Heather Matthews, a 27-year-old teacher from Preston in England, was partying in Ibiza whilst parading around in clothing that revealed most of her body. Since then her life has undergone a total transformation, and is now a proud Muslim who wears the Islamic hijab.

It has now been four weeks since her conversion to Islam, a decision which left some of her friends shocked, and provoked a cautious reaction from her family. She openly admits that her friends might consider the move as being ‘one of her fads’, but
The decision to accept Islam came just two months after her return from partying in Ibiza, and looking at the photographs of the ‘old her’ confirm to Heather what was wrong with her old lifestyle, and what is right about the religion of Islam. While her friends have struggled to get past societies portrayal of Islam as being oppressive towards Islam, Heather acknowledges that it is the life she is leaving behind that is far more oppressive, and that Islam is the complete opposite of what the media proposes.

She was caught up in trying to adhere to the Western image of beauty, where people need to dress and act in a certain way to feel good about themselves. It is an ideal that requires them to dress in lesser amounts of clothing, show their private body parts to the public, and coat themselves with makeup to beautify their outer appearance, all of which is generally done to please men.

Heather’s experiences have led her to realise that the Western culture is a shallow lifestyle, where people seek instant gratification to fill their lives with. People are constantly searching for more pleasure because these small gratifications are not fulfilling. Islam has instead given her a ‘love and happiness’ that she could never find in her old lifestyle. She has learned about real love, not false passion and lust, and can even now see the logic behind arranged marriages.

A part of her realisation was that women are treated based on how they are dressed. It is a society where if a girl is dressed a certain way, regardless of her intentions, she will be on the receiving end of unwanted treatment. Women who have no self-respect often face the consequences of their decisions in an unfair way, and Heather has surprisingly found wearing the hijab to be the complete opposite experience.

Instead of men lusting after her when she is scantily dressed, she finds that the men no longer try to chat her up or harass her in the streets. Heather now refers to the hijab as an ‘idiot repellant’, and enjoys being able to walk down the street and smile at people without them thinking its a sexual advance. This lust is what leads to relationships in the west, and she acknowledges the benefits of a relationship first based on friendship instead, and then developing into love.

This premise is something that in hindsight she wishes she had applied in her previous life, but it is a life that has led her to the success in Islam, which has been a number of years in development. Her ex-husband Jerrome was a Muslim convert himself, and Heather had such a firm belief that the religion was wrong, that she used to study it to support her arguments. Even though they separated last year, she found herself continuing to learn about Islam, and identifying with it more in the process.

Heather finally accepted Islam after learning the truth about the religion, and said her Shahadah four weeks ago in front of the Imam at her local multi-faith centre. She said it was a wonderful experience, and she had several other Muslim sisters there with her, who gav her gifts including a hijab and Islamic books. Heather has now given up alcohol, eats halal food, and plans to fast in the next Ramadan. She is still learning the prayers in Arabic, and is reading an English translation of the Quran every day.

Her conversion to Islam has astounded her, as Heather considered herself one of the most unlikely people to ever become a Muslim. According to a study by multi-faith group Faith Matters, Heather is actually a likely candidate. She is now one of over 100,000 converts to Islam in Britain, which is a figure that has doubled in the past 10 years. Her age of 27 is the exact average age of converts, and about two-thirds of those converts are women.

Becoming a Muslim was entirely her own decision, and it is a religion that she wont be forcing up her two daughters from her previous marriage to Jerrome. Five-year-old Ellah and two-year-old Halle will be left to make their own choice about Islam according to their free will. Onlookers in the street may feel she is being oppressed and wearing hijab against her will, but Heather says she is instead a ‘strong, confident and free woman’ and that she made the choice ‘for love and happiness and it has completely changed my life’.