CAIRO – Germany's young footballer Danny Blum has announced his reversion to Islam, describing it as a religion of hope and strength.

"I was short-tempered, erratic and did not know where I belong," he added. 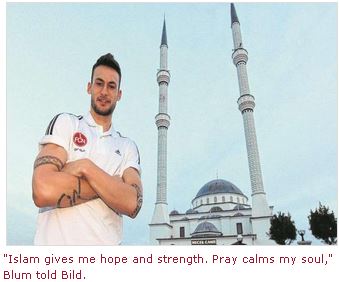 Blum joined 1. FC Nürnberg in Bavaria last July. The team plays in the he Second Division of professional football in Germany, the Bundesliga.

Shortly after joining the team, he injured his knee and was forced eventually to take six months off.

A few weeks ago, he took the decision to revert to Islam, joining the world’s fastest growing religion.

"Living in the lap of luxury. Every weekend make alarm. No responsibility for anything. And what actually comes after retirement?” the questions came to Blum as he sat at home.
Talking with his friends about religion, he landed in Islam.

"I have visited a mosque and I immediately risen the heart. I felt this is something for me and wanted to know more," Blum told Bild.

Ever since, he prays five times a day and eat halal food. Informing his parents with his decision, the 24-year-old player said they were scare at first.

"They are devout Christians. But soon they said that I have to go that route if I believe that it is right," he said.

“Islam is a peaceful religion. My faith says: never force anyone to do what he does not want. If you think, it has to come voluntarily from the heart!"

Germany is believed to be home to nearly 4 million Muslims, including 220,000 in Berlin alone. Turks make up an estimated two thirds of the Muslim minority.