An Open Mosque Day held at Kandy’s historic Katukele Grand Mosque  was an immense success. Around 600 people of other faiths including Buddhist Monks, Christian clergy, Government officials. Army Officers, Police, Diplomats, Principals, Teachers and School Children participated in the tour.
This was the 9th such program organised by Sri Lanka’s pioneering Islamic outreach organisation, the Centre for Islamic Studies (CIS). The program was conducted in association with the trustees of the mosque and Muslim Youth Society of Katukale  (MYSK).
Besides a tour of the mosque, visitors were taken around a poster walkthrough, given traditional Muslim foods and free Arabic calligraphy of their names. A free henna corner for the ladies was also part of the tour.
Asiff Hussein, Vice President – Outreach, CIS, said his organisation planned to conduct many such programs in the future, including permanent, walk-in tours at the country’s oldest standing mosque, Abrar Grand Mosque in Beruwala.

Mohamed Jaleel, Director, Outreach, CIS, said that the mosque tour program was a unique interfaith initiative which had the support of people of all faiths including clergy who were among the biggest supporters of the program. 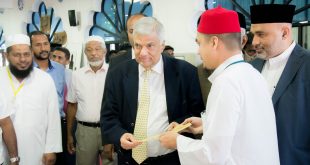