Did you know that there are over 2500 mosques in United States? Did you know that anyone including those who are not Muslim, can tour their local mosque anytime! 877-Why-Islam presents a visit to an American mosque.

Throughout Islamic history, the mosque was the center of the community and towns formed around this pivotal building. In the West mosques are integral parts of Islamic centers that also contain teaching and community facilities.

Mosques come in all shapes and sizes; they differ from region to region based on the density of the Muslim population in a certain area. There are never any images of life or statues in mosques.

877-Why-Islam presents a visit to an American mosque. In an ongoing effort to dispel misconceptions about Islam, 23 mosques will open their doors Sunday to the non-Muslim community 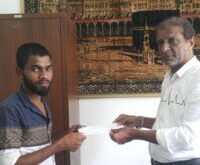