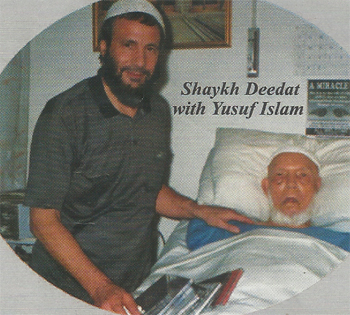 Allah in His mercy has been delivering to mankind time and again some one who will uphold His message. In that line Sheik Ahmed Deedat appeared as a beacon light and won the hearts and minds of Muslims throughout the world. He came at a time when the Muslims seemed helpless, hopeless and defenseless at the mercy of Evangelical Missionaries- fishing on ignorance, disaster and deceptions. He gave us hope and set a brilliant example for the younger generation and would be da’ees. May Allah the Rahman and the Raheem shower His mercy upon his soul.

It was on an ordinary day in August 1927 that a ship left the shores of the Indian Harbour with a human cargo – destination South Africa – the land of apartheid where Whites and Blacks were deemed to be not just different races, but distinct species. Amongst this human cargo was a small boy destined to become a master debater of our time.

Born on July 1, 1918 in the District of Surat India – the District that gave the world the ever remembered Allama Yusuf Ali, Ahamed at the tender age of 9 moved to South Africa along with his father Hoosan. The hazardous sea voyage gave this little boy a memorable experience. Recalling his arrival “I nearly never disembarked. The ship was late by a day and the authorities wanted to send us back, but my father insisted on taking me off the ship. When I got off and rode on a tram, I thought my father owned it. I saw my father pay the fare – I thought he was paying the wages of one his employees.”

Enrolled at Anjuman School, Ahmed was exposed to a language- English that was not familiar to him, but within 6 months he did extremely well and in a short while mastered it. Financial constrains interrupted his schooling and at an early age of 16 he became a lorry cleaner, later a lorry driver and finally found work as a salesman  in a country store opposite Adam’s Mission, an institution where young missionaries were trained to convert the world to Christendom. Students of Adam’s Mission were frequent visitors to the shop. In the words of Ahamed the students of Adam’s Mission “used me as a guinea pig”. Knowing  little more than the Shahadah Ahmed found it difficult to defend himself. They would say “You know Muhammad (sal) had many wives” and I would think “I know nothing about that and they would say  “You know Mohammad (sal) spread his religion at the point of the sword” and I would think, “I know nothing about that”. Teased and taunted by these questions Ahmed became restless and desperate at his setback.

Having not seen the colour of a proper school, nor the echelon of great educational institutions Sheik Deedat is an autodidactic. Attitude determines how one looks at a setback. To a positive thinker, attitude can be a stepping stone to success as much as it can be a stumbling block to a negative thinker. “Every problem comes with an equal or greater opportunity” said Napoleon Hill, author of “Think and Grow Rich”. This opportunity came while cleaning the shop in which he worked, that he found a book that would change his life for ever. “Izhaar – ul – Haqq”-The Truth revealed, – a book about a debate with Christian Missionaries in the then British India remains as a priced possession in Sheik Deedat’s personal library. Inspired by this book Sheik Deedat was spurred into action on the direction of Dawah to halt the Christian onslaught against Islam. ‘Reading maketh a man’ and thus a man was born reading anything and everything that came his way on Islam and Christianity. He eventually did his own research on the many Missionary allegations on Islam and on the myriad of contradictions found in very many Bibles available today.

He took to the stage in 1940, the topic was   “Muhammad Sallallahu alayhi wassallam: Messenger of Peace” to an audience of less than 15 people at Avalon Cinema Durban. His message was loud and clear on the many contradictions in the Christian Bible and Doctrine and Muhammad Sallallahu alayhi wassallam was indeed the final Messenger of God. His next venue was Durban’s City Hall with an audience of nearly 2000. Question and answer sessions were a part and parcel of his lectures. Christians lined up with their Bible in hand attempting to refute him. He silenced them   in his own inimitable way quoting the Bible from memory. With an elephantine memory Sheik Ahamed was a amazing debater with a bag full of rhetoric. To hear him was to witness a tour de force of unparalleled linguistic dexterity that left the audience spellbound.

Over the next decades he immersed himself into a host of activities, conducting classes, lectures and debates the world over. He published more than 20 books and distributed millions of free copies of literature and pamphlets the world over for the greater Glory of the Faith. Many of Sheik Deedat’s publications have been translated into different languages: Russian, Urdu, Arabic, Bengali, French, Chinese, Japanese, Malayalam, Zulu, Afrikaans, Dutch, Norwegian amongst others. The International Islamic University in Tripoli Libya even went to the extent of conferring a Doctorate to an African Student on his thesis “Debating techniques of Sheik Ahmed Deedat”. 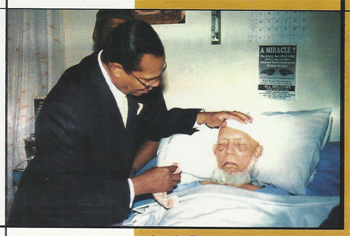 His first opportunity to place his feet on foreign soil as a lecturer came in 1976 and this was in the land of our beloved Prophet Muhammad (sal). Accompanied by his friend Ebrahim Jadwat he traveled to Riyadh for a Conference. His friend Ebrahim was later to remark: “When I asked the people from Saudi television to interview him, they laughed at me, saying that they had 50 to 60 of the greatest scholars from all over the world, so why should they interview him?” “So I said “Give him two minutes of your time and I am sure you’ll find something interesting”. So they humoured me and gave him the opportunity to come on television”.

“If you want to leave your footprints on the sands of time, do not drag you feet” goes an old adage. Sheik Deedat was never a feet dragger. So strong were his feet and head every time he put them down Christendom shook. His entertaining approach, dynamic personality, brilliant repartee, in depth knowledge of the Bibles and unique ideas swept the Arab world off its feet. He delivered thousands of lectures all over the world, crisscrossing all the continents and successfully engaging some of the biggest names in the Christian Evangelical world at the best of venues. London’s Royal Albert Hall witnessed flamboyant Sheik Deedat in his encounter with the well known American Missionary Prof. Floyd E. Clark. Hundreds of holiday makers from all over the world made their way to the Royal Albert Hall to taste Sheik Deedat’s God given gift. Indeed it was more like a box office hit. His success took him on whirlwind tours covering Morocco, Kenya Sweden Australia, Denmark, Maldives, Sri Lanka, Pakistan, Bangladesh, the Gulf States, and Malaysia. Eight Thousand people attended his debate on “Is the Bible the Word of God” with much renowned (now very much scandal  ridden) American televangelist Jimmy Swaggart who was head of a $150 million ministry. This debate tops the list in Sheik Deedat’s “Great Debate” series.

Sheik Deedat became an icon of the World and the former President of South Africa Nelson Mandela congratulated him for his international iconic status in the Muslim World. Sheik Deedat received the prestigious King Faisal Award in 1986 for his sterling services to Islam in the field of propagation. He fell ill in 1996, shortly after his trip to Australia, which was a momentous tour. He had given one of his most passionate talks in front of a capacity crowd in Sydney on the theme “Easter: A Muslim viewpoint”. This was his last lecture before he suffered a stroke, which left him paralyzed from the neck downwards. It also meant that he was no longer able to speak or swallow. He received specialized treatment and care at the King Faisal Hospital in Riyadh where he was 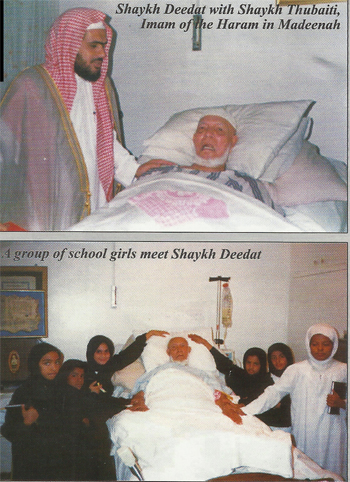 taught to communicate by coordinating his eye movements with an alphabetical chart which he memorized. Confined to bed he received hundreds of letters and personal callers. Amongst them was Sr. Yvonne Ridley. When contacted Yvonne Redley said about this great debater and Dai of our time. “Sheikh Deedat may be incapacitated from the neck down, and is unable to speak in the conventional sense, but I have seen more life, activism and humour in him than in many of the Muslims I’ve met during my travels around the world. He is an amazing brother with a great presence and has overcome tremendous adversities and still continues his work for Allah. I felt humbled in his presence and I will treasure the time I spent with him for the rest of my life. I salute his courage, piety and dedication to Islam. “

It is nevertheless disheartening and painful to note that none of the 53 Muslim countries of the world thought it fit to honour this great dai of our time in a meaningful way .  Finland a country that hardly comes to the mind of any Muslim has issued a commemorative stamp in honour of this great man.

The Centre for Islamic Studies (CIS) founded in the year 1985 is ever grateful to Sheikh Ahmed Deedat who gave us the vision and mission. Sheikh Ahmed Deedat made three visits to Sri Lanka as the guest of CIS. His lectures took the city of Colombo by storm and yet linger in the minds of many.

‘Oh! Allaah, Sheikh Ahmed Deedat is under Your care and protection so protect him from the trial of the grave and torment of the Fire. Indeed You are faithful and truthful. Forgive and have mercy upon him, surely You are The Oft-Forgiving, The Most-Merciful’.