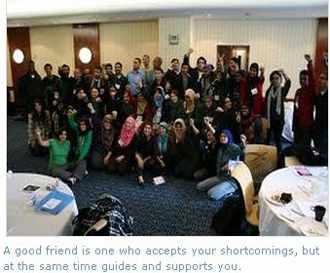 Prophet Muhammad (peace be upon him) often spoke to his companions about the value of good companionship.  He emphasized the need to surround ourselves with good people.

People, who hold the same values and beliefs that we do, make the best friends and companions.

Differences of opinion, different lifestyles and interests may make our friendships interesting and sometimes challenging but if the core value system is not the same the friendship itself probably has no solid foundation.

For the believer, the solid foundation must always be Islam; the irrefutable truth that there is no god worthy of worship but Allah and that Muhammad is His messenger. Every believer, past, present and future is linked by this fundamental truth. Prophet Muhammad spoke about this bond on many occasions.

“The example of the believers, in their mutual love and mercy for one another is like the example of one body, if one part feels pain, then all of the body suffers in sleeplessness and fever.” (Al-Bukhari & Muslim)

“The believer to the believer is like a solid building, one part supporting the other.” (Al-Bukhari & Muslim)

It is important to choose your friends carefully. Prophet Muhammad warned the believers about this too.  He said that a person would be influenced by his friends, and he warned that everyone should look carefully at those they consider to be their friends:

“A person is likely to follow the faith of his friend, so look whom you befriend.”  (At-Tirmidhi)

What we can understand from this is that it is easy to be influenced by the people around us. It is easy to take on their mannerisms and qualities without even being aware of it. If these are good qualities then it is a good thing but what if the people you consider friends have pushed you away from the remembrance of God?  This could be a disaster, and God warns about it in the Quran.

{And (remember) the Day when the wrong-doer (oppressor, polytheist etc.) will bite on his hand, he will say: ‘Oh!  Would that I had taken a path with the Messenger.  Ah!  Woe to me!  Would that I had never taken so-and-so as a friend!  He indeed led me astray from the Reminder (the Quran) after it had come to me.} (Al-Furqan 25: 27)

Prophet Muhammad also reiterated this point when he told the story of the blacksmith and the perfume seller:

Once we have found good friends it is important to keep and maintain the friendship. Believers are connected by their love of God and His messenger and this entails certain responsibilities. A person must be prepared to overlook some of the faults of his brother or sister in Islam; he must be prepared to give them excuses for any incorrect or bad behavior they see in them.

This does not mean however you should turn a blind eye to sin. No, rather it means that you must maintain the ties of friendship while seeking to understand and help those who have gone astray. Believers must never embarrass or publicly harass one another. They must never expose each other’s faults. Kindness and mercy must be evident in all dealings:

“Whoever conceals (the fault of) a Muslim, God will conceal his fault on the Day of Judgment.” (Abu Dawud)

Islamic scholar, Ibn Mazin said: “The Believer seeks excuses for his brothers, whilst the hypocrite seeks out their faults.”  Another Muslim scholar, Hamdun al-Qassar said: “If one of your brothers’ commits an error, then seek ninety excuses for him, and if not, then you are the blameworthy one.”
In his traditions, Prophet Muhammad said:

“A person visited his brother in another town and God sent an angel to wait for him on his way.

The angel said: “Where do you intend to go?”

The man answered: “I intend to go to my brother in this town.”

The angel said: “Have you done any favor to him, the repayment of which you intend to get?”

He said: “No, I love him for the sake of God, the Exalted and Glorious.”

Thereupon the angel said: “I am a messenger to you from God to inform you that God loves you as you love him.” (Muslim)

Believers should never be envious of one another, they should always be happy when the blessings of God fall upon their friends and companions. Prophet Muhammad said:

“The Muslim’s prayer for his absent brother will be answered. There is an angel at his head who, whenever he prays for his brother, says, Amen, and you shall have likewise.” (Muslim)

“Do not have malice against a Muslim; do not be envious of other Muslims; do not go against a Muslim and forsake him. Oh the slaves of Allah!  Be like brothers with each other. It is not violable for a Muslim to desert his brother for over three days.” (Muslim)

A believer loves all other believers for the sake of God. He desires for them what he desires for himself.  A believer is tolerant of others mistakes or shortcomings and is forgiving. There is no anger, envy, hatred or malice between believers. Believers are kind, loyal and generous to one another and they pray for each other.

It may sound too good to be true, doesn’t it? This however is Islam. It is a way of life that expects every person to respect every other person. Islam says you are part of a community and it is your right and your responsibility to be the very best person that you can be. Seeking good companions and maintaining good relationships is a responsibility that each believer has to himself, his community and to God. Seek companions who are seeking paradise in the hereafter.

{Content yourself with those who pray to their Lord morning and evening, seeking His approval, and do not let your eyes turn away from them out of desire for the attractions of this worldly life, and do not yield to those whose hearts We have made heedless of Our remembrance, those who follow their own low desires, those whose ways are unbridled.} (Al-Kahf 18: 28)