Mosque Tours are fast catching on in Sri Lanka. The latest Open Mosque Day held at Kollupitiya Jumma Mosque in Colombo on 22nd January had around 800 people of other faiths participating. Besides a tour of this beautiful mosque, participants were taken around a poster walkthrough clearing misconceptions of Islam, given free calligraphy of their names in beautiful Arabic script and served traditional Muslim foods, besides a henna corner for the ladies.

“Mosque Tours” is a unique interfaith initiative where people of other faiths are invited to mosques to learn about Islam. The Centre for Islamic Studies (CIS) launched its pilot Mosque Tour program at Wekanda Jumma Mosque Colombo in 2014 and since then it has taken off in a big way. Mosque Tours have been held in various parts of the island, including in Colombo, Kandy, Beruwala, Akurana, Gampola, Anuradhapura and Pottuvil. This included the first Open Mosque Day held at Akbar Mosque, Slave Island in March 2017, which was the first occasion in Sri Lanka where a mosque was open to the public to visit. More such mosque tours are planned to be held in the southern parts of the country like Aluthgama, Weligama and Galle this year.

Asiff Hussein, Vice President, Outreach, CIS said that his organization had received the support of the religious establishment and mosque trustees in many parts of the island.

“A couple of years ago we had a hard time convincing trustees of mosques to come on board, but today they are earnestly requesting us to conduct mosque tour programs in all parts of the country and we simply cannot meet the demand. However we do plan to have a number of such programs this year as well in many parts of the country. Religious scholars from both the All Ceylon Jamiyyatul Ulama and Jamiah Naleemiah have also been very supportive and in fact participate in our tours as mosque Tour Guides. Most importantly, we have had a tremendous response from people of other faiths who are very keen to see for themselves what goes on inside our mosques”, he noted.

Mohamed Jaleel, Outreach Director, CIS who leads the teams of Mosque Tour Guides is hopeful that the idea of opening up religious sites to learn about different religions will catch on with time. “We have had Chief Prelates of Temples, Hindu Svamis, Christian Fathers, Provincial Councilors, Mayors, Government Officials and even Police Officers participating, which shows the wide acceptance of the program as an inter-faith initiative to build good relations with all communities”, he observed. 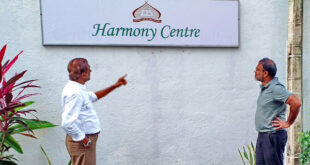 The Centre for Islamic Studies Building will henceforth be called CIS Harmony Centre, which is …